In this post we have tried to gather various suggetions ant tips to guide you inside the calli (the typical narrow streets of Venice) of sestiere San Polo, tryng to make you discover the characteristics and the beautiful attractions of this district.

Sestiere San Polo is the smallest of Venice and it is very loved by the venetian people for the relaxing atmosphere that you feel walking around the streets; in the past, however, it was blended with sestiere Santa Croce.

Its name derives from the presence of Campo San Polo, the biggest square of Venice after Piazza San Marco , and for the Church with the same name. Although it has always been considered a square of the working class, because public events took place here, this sqaure is surrounded by noble palaces.

It is a very characteristic district because of the presence of a lot of “house and workshop”, that are places where people live and work, and also for the huge variety of typical venetian taverns that are called “bacari”.

The most famous and animated area is Rialto, thanks to the presence of the fish market and fruit and vegetable that makes the area more chaoitc but, at the same time, a typical and very characteristic place of Venice. Rialto’s area is one of the most popular for shopping and in the evening it becomes the center of the nightlife for the young people of the district, which met each others around Erbaria (the area of the dock overlooking the Grand Canal).

In San Polo we can find Rialto’s Market, place where a scene of the film “The tourist” was shooted, a film with Angelina Jolie and Jhonny Depp. In the scene the main character (Depp) during an escape through the roofs of Venice, jumps on a tarp of the Market.

Also in this sestiere stands Scuola Grande San Rocco, which Hall of Capitolo was the place of a scene of the film “Casanova”. In this hall was organized a masked ball which also the main character Giacomo Casanova took part in it.

Where is sestiere San Polo and how to reach it 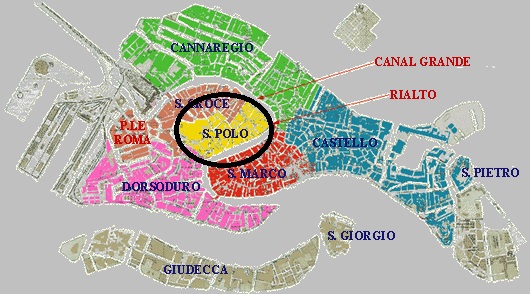 Sestiere San Polo is served by both the line 1 and line 2 of the ferry boat service. These two lines traveled all the Grand Canal. The stops for reach San Polo are Rialto’s Market, San Silvestro and San Tomà. Walking from the Station Venezia Santa Lucia takes more or less 15 minutes to reach in the central part of the district.

In sestiere San Polo we can find a lot of attractions, including the “must” of Venice and the less famous attractions that deserves a visit if you have enough time.

The most important attraction of San Polo is Rialto Bridge, the oldest bridge of Venice that links the two shores of Grand Canal.

Another unmissable attraction is also Basilica dei Frari, that has important frescos of Tiziano and Bellini and Scuola Grande San Rocco, decorated by Tintoretto’s frescos.

Finally, another church to visit is Church San Giacomo di Rialto, the oldest of Venice and the heart of the trade of the city in the past and the House of Goldoni, place where probably the famous comedy writer Carlo Goldoni was born, that today is the location of the Museum of Theatre.

If you have more time available

If you can have a relaxing walking through the streets os sestiere San Polo, it also deserves a visit Palazzo dei Camerlenghi, that was built in a reinassance style, and the Church San Polo, famous for the paintings of Tintoretto and Tiepolo.

Finally, in this area there is also the Church San Giovanni Elemosinario, located in the area of the market of Rialto and Scuola Grande San Giovanni Evangelista, location of a lot of meetings, cultural expositions and events in Venice.

In you want to have a break and, at the same moment, tasting some typical venetian dish, we can suggest you some place where you can eat good food without spendin a lot of money.

The first place that we suggest you is “All’Arco” in Calle Arco. One of the favourite places of venetian people with its cicheti (typical venetian finger food) with fish like scampi, squid and prawns with toasted bread.
.
The second place is “Cantina do Mori”, in Calle of Do Mori. Venetian people in this place love “Francobollo” (“Stamp”), a sandwich with salami, Gorgonzola cheese and radicchio. There are also traditional dishes like Eggplant Parmesan and artichoke with salt.

Finally, very famous through venetian people, we have “Osteria al Sacro and Profano”, a little typical tavern, in the area of Rialto, that serves fish dishes, meat and typical dishes of venetian’s tradition. There are also very good wines, both red and white.

You can go to Pasticceria Rizzardini for a little break close to San Polo Fields and eat one of the pastries and cakes that are exposed in the showcase of the counter.

Where to stay in San Polo

Sestiere San Polo is the best place for who wants to stay in a quiet area without the continuous stream of tourists, despite of the position in the center of Venice.

We selected the best hotels following the reviews of the tourists who have stayed in Venice, hoping that could be helpful for you to choose the place where sleep and that you are fully satisfied for your choice.

This rentrooms is in the center of sestiere in a building of the sixteenth century. The rooms are spacious, furnished in a classic and elegant style with antique furniture and clean. The owners are helpful, kind and welcoming; help is offered for the reservation of tours and for tickets.

This little B&B is located in the center of the district, at the fourth floor of a historic building. The rooms and the bathrooms are very clean and spacious. Breakfast is rich and varied, it is served in a hall with a wonderful views. Despite of the very good position, the price is very convenient.

This Bed and Breakfast is close to Campo Santa MArgherita and the train station. Breakfast is plentiful and with good products. The rooms are big, furnished in a stylish way and very clean. The owners are very kind and the atmosphere is familiar.

For give you an idea of what is waiting for you in this sestiere if you want to visit it, we suggest you to watch this nice video from Youtube: